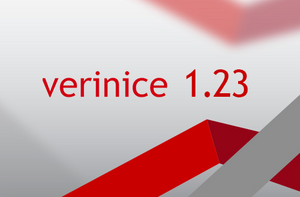 From now on verinice and verinice.PRO version 1.23 are available for  download in verinice.SHOP or in customer repository respectively. The verinice.TEAM delivers with verinice 1.23 more than 30 new features, detail changes and bug fixes. These are described in detail in the release notes.

Among other things, verinice 1.23 now uses Java 11, and the Java Runtime Environment (JRE) from Adoptium (formerly AdoptOpenJDK) shipped with the client has been updated to the latest version. For this, update notes are listed in the release notes and must be followed.

If you have any questions or need help with the update, feel free to contact us - including by email at verinice@remove-this.sernet.de. You are also welcome to exchange ideas with other users and the verinice team in the Forum (mainly German).

Users can look at the planned features for upcoming versions in the verinice.FORUM under "Roadmap". They can also suggest new features there or discuss specifications for already suggested features with the team as well as other verinice users.

The release of verinice 1.23 is scheduled shortly before it-sa. The IT security trade fair will be held in Nuremberg from October 12 to 14. The verinice team will be in Hall 7a, Booth 326, where they will be available to talk about verinice . The team will also be happy to provide information about verinice.veo - the new verinice generation - at it-sa. Use our contact form or send us an email to itsa@sernet.de if you would like to exchange ideas. Please note that only discussions are scheduled at the booth. Detailed product presentations will only take place remotely due to hygiene regulations. Requests for appointments - both for on-site meetings and web meetings - can be submitted via the contact form. We will then get in touch with you.

2021 is it-sa-year again! From October 12 to 14, the trade fair on IT security will take place again in Nuremberg after a one-year break. In Hall 7a, Booth 326 the verinice.TEAM of SerNet GmbH will be present together with the verinice partners Cassini, SILA Consulting and c.a.p.e. IT.

Colleagues from SerNet as well as the partner companies will be available to talk about verinice. The partners will also inform about their own range of services such as the setup of a management system for information security, consulting on standards such as BSI IT-Grundschutz, ISO 27001 and others as well as certification support. c.a.p.e IT GmbH advises on the integration of verinice.PRO and KIX Professional.

You are welcome to make an appointment with our partners or us in advance. Please use our contact form or send us an email to itsa@remove-this.sernet.de. Please note that only discussions are scheduled at the booth. Detailed product presentations will only take place remotely due to hygiene regulations. Requests for appointments - both for on-site meetings and web meetings - can be submitted via the contact form. We will then get in touch with you.

We will gladly send you an individual registration link for a free it-sa ticket. With this you can explore the it-sa on one day and of course visit us at our booth. Just send us an email to itsa@remove-this.sernet.de, we will send you your link to the ticket.

version 1.22.2 of verinice and verinice.PRO is now available for download in the verinice.SHOP or in the customer repository. verinice 1.22.2 (Release Notes) is a security update. The verinice.TEAM recommends all users to apply the available patch as soon as possible.

With verinice 1.22.2 the team fixes a vulnerability, details are described in the Security Advisory. The official CVE ID is CVE-2021-36981. We would like to especially thank Frank Nusko (Secianus GmbH), who found the vulnerability and informed us about it. Together we were able to prepare a Coordinated Disclosure.

Secianus will publish the details of the vulnerability shortly, so that verinice users have enough time to update. If you need help with this or have any open questions, please feel free to contact us at sales@remove-this.sernet.de.

As of now, the verinice.TEAM provides the BSI published Benutzerdefinierte Bausteine for use in verinice free of charge. They can be ordered and downloaded from the verinice.SHOP. 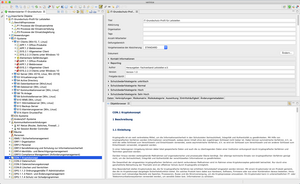 The original IT Baseline Protection Profile for control centers can be downloaded as PDF from the BSI (German only).

The verinice.TEAM has published the additional module verinice PCI DSS. This requirements catalog maps the Payment Card Industry Data Security Standard (PCI DSS) in verinice. The module can be used with verinice starting with version 1.22 in the ISM perspective. It is available to purchase in the verinice.SHOP.

About the module verinice PCI DSS

Together, verinice and the PCI DSS module make it much easier to check and process compliance with the requirements. The module contains the complete PCI DSS requirements, which are imported into verinice. Users can thus skip the time-consuming and tedious part of the work, and use time more productively for working with the standard. In addition, responsibilities can be stored in verinice and individual requirements can be delegated so that colleagues can work together on the assessment. The associated reports provide meaningful overviews of the status quo of the organization.

The Payment Card Industry Data Security Standard (PCI DSS) was developed to improve the security of cardholder data and facilitate the adoption of consistent data security measures around the world. The PCI-DSS provides basic technical and operational requirements for protecting cardholder data. The PCI-DSS applies to all entities involved in the processing of payment cards – including merchants, processors, billing entities, card issuers and service providers, and other entities that store, process, or share CHD (Cardholder Data) and/or SAD (Sensitive Authentication Data). 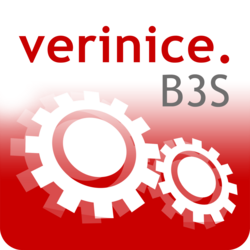 verinice. as well as verinice.PRO and the add-on module Zusatzmodul B3S Krankenhaus are qualified for funding from the Hospital Future Fund (KHZF). SerNet thus offers clinics and hospitals that have to improve their IT security and introduce information security management by the deadline of 01.01.2022 a comprehensive solution that meets their needs and is also eligible for funding. The corresponding proof of suitability for eligible service providers is held by SerNet.

The ISMS tool verinice or verinice.PRO is already in use as a reliable solution in the healthcare sector (e.g. Universitätsklinikum Halle, Charité Universitätsmedizin Berlin). The verinice.TEAM has also integrated the "Industry-Specific Security Standard for Healthcare in Hospitals" (B3S Krankenhaus), which is published by the German Hospital Association. The combination of verinice and the industry standard supports hospitals in meeting the requirements of the Patientendaten-Schutz-Gesetz (PDSG). According to this, by 01.01.2022, clinics and hospitals that are not classified as KRITIS (>30,000 full inpatient cases) are also "obliged to take appropriate organisational and technical precautions in accordance with the state of the art to prevent disruptions to the availability, integrity and confidentiality of their IT systems in order to ensure the functionality of the respective hospital and the security of the processed patient information."

In accordance with the Krankenhauszukunftsgesetz für die Digitalisierung von Krankenhäusern

funding can be applied for for the procurement and operation of verinice or verinice.PRO as well as the verinice module B3S Hospital since 1.1.2021. The responsible colleagues from the SerNet sales team have also obtained the necessary certificate in accordance with the Hospital Structure Fund Ordinance (KHSFV). SerNet is thus an authorised service provider.

Some verinice.PARTNERS can also already show the "KHZG certificate" and offer comprehensive advice on the topics of: Improving IT security, ISMS for hospitals in general or specifically with the B3S and the funding from the KHZF. You can identify the relevant partners via our Partner-Locator.

The new version of the ISMS tool verinice 1.22.1 is available.

Users can either obtain it from the verinice.SHOP or download it from the repository for Pro customers. In the release notes for verinice 1.22 we list all new features.

The BSI IT-Grundschutz-Kompendium Edition 2021 is now also available in the verinice.SHOP or in the Pro repository. It is recommended to use it in combination with verinice 1.22 – an update is possible from the former Edition 2020 is possible.

Particularly noteworthy in the new version are:

verinice 1.23 is scheduled for week 40 (October 4-8, 2021). The planning for this can be viewed in the verinice.FORUM. Native support for Apple M1, an update to Java 11 and an update of the RCP framework are already set. A decision on the CentOS successor should also be made by the time of the release in the fall. 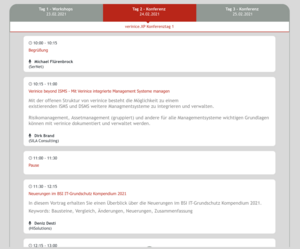 The final program for verinice.XP 2021 is online. For the first time, the conference will take place completely in digital form on February 24 and 25. The speakers will give their presentations live via Zoom – participants can follow the conference flexibly from any location. The agenda is published on the conference website, tickets are available for 99 euros.

The main language of the conference is German; have a look at this article about the program. If you would be interested in a verinice.XP in English or an Workshop please contact us at verinice@remove-this.sernet.de.

verinice.XP is the conference for users of the OpenSource ISMS tool verinice.